The Valentine's Day Event is a seasonal event that occurs on the 14th of February to celebrate Valentine's Day. It is almost identical to the White Day Event that typically occurs a month later on the 14th of March. It is available to players that are level 30 and above. The event requires one female and one male character in a squad together in order to participate.

Female characters also have an additional step in the event that involves lighting a Fortune Lantern, however this extra step does not give any additional rewards.

I'm looking for the one I'll spend my life with. (If female)

I am looking for my special one. (If male)

If you are a female character, you will also receive a Fortune Lantern in your inventory. It can only be used on the day of the event, Valentine's Day, in a specific area in South-east Archosaur behind the PW Promotions Agent (585, 628). When the lantern is used in the correct place at the correct time, a lantern will spawn for 2 hours at the spot you used it at. No additional rewards are given for using the Fortune Lantern. 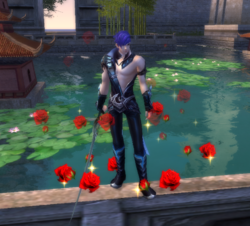 The Love Like Honey(Valentine Ver.) when used will surround the player with rose petals for 5 minutes. It has no other functions, cannot be traded, and cannot be used on other players.