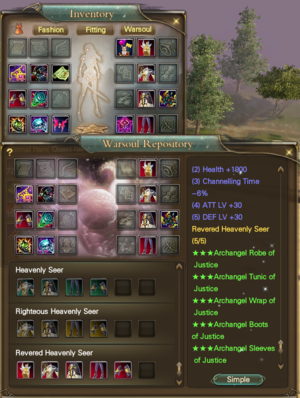 The Warsoul Repository is a system that stores information on certain equipment sets that the player owns, and allows them to take advantage of their Set Bonuses while wearing different equipment. It can be accessed through the inventory by clicking the Warsoul button at the top of the window.

Initially the Warsoul Repository is locked and can only be unlocked with the use of a Warsoul Gem. It can be purchased from the Boutique for 30 gold. It also has a small chance of dropping from Lethal Vengeance, the final boss in Twilight Temple Revisited.

Only certain sets are available through the Warsoul Repository, and are restricted to your class. As you acquire pieces of a set they will be permanently recorded in the repository; the records won't disappear if you remove or discard the equipment. Equipment that was previously owned at the release of the repository in the January 2019 Content Update are not recorded unless you are still in possession of them; you cannot record Rank 9 (First Cast) equipment if you have already used it to make Rank 9 (Second Cast) before the update.

Sets available in the repository:

Currently Rank 9 (Third Cast) is not available in the repository.

You can mix and match equipment in multiple Warsoul Gear Slots to acquire multiple set bonuses, just like regular equipment. Although there are two versions of Rank 9 (Fourth Cast), you can only benefit from one of their set bonuses at a time.

You can view another player's set bonuses they have activated through the repository. You can do this by viewing their player info and hovering over the

icon. If the player does not have the Warsoul Repository unlocked it will show the set bonuses they have on the gear they currently have equipped, as well as a list of gear they have equipped that are a part of a set.