The capital of the Light Empire, Neverfall.

The Western Steppes are a region introduced in the PWI Neverfall expansion. It is available for players who have gone through their second Reawakening and have reached the Boundary of Mirage Sky I. The Western Steppes are the home of the Light Empire, where Emperor Alexander and Empress Althea originate from. Alexander and Althea are two characters players originally meet through the Primal World story.

This region is tied to the Glyph System and the expanded Spiritual Cultivation of Chaotic Soul and Celestial Saint. The Western Steppes are considered to be an extension of the world map, but are not actually part of the open world. 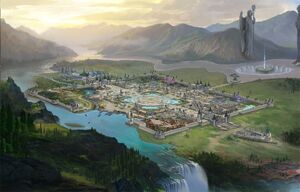 Art of the city of Neverfall.

For many years, a magical force kept the Midlands isolated from the rest of the world. One day, the Western Steppes appear on the map once more, but the citizens are unaware of what had happened and Empress Althea believes something is off. Upon arriving to the lands of the Western Steppes, you get accused of murder. You begin your own investigation which leads you to the glorious city of Neverfall.

In Neverfall you get to study at the Arcane Academy, discover Neverfall's history and help the people of the Western Steppes. Everything goes well until you learn of the Future of Mankind Initiative (FMI), their exploits and their inhumane experiments. To stop them, you join Neverfall's elite soldiers; the Rose Cavalry. Your adventures eventually lead you to the heart of FMI's Dawnlight Halls only to discover the truth behind Neverfall and the existence of the Changelings.

You begin seeking allies in the Western Steppes. The Light Elves and the Dark Elves you once saved, along with General Summer from the Midlands, come to your aid. The Changelings attempt to assassinate Empress Althea and assault General Summer's army. Two unlikely allies and the visions from the Observer's Crystal help you counter the Changelings. Through these battles, you come to learn more about these creatures and understand there are good and evil Changelings.

Is the Changeling threat truly gone though?

When your character meets the requirements of Reawakening 2 level 100 and a boundary level of Mirage Sky I or higher, they will receive the first quest "The Light Returns" of the Map to Neverfall quest chain. If the quest does not appear, try visiting the Elder of the Streams in the City of a Thousand Streams to see if he has the quest for you.

The quest will send you to gather three keys that will allow you to find the long lost map of the Western Steppes. Once you have acquired the map, you will have to visit the Dreamweaver Port. Follow the questline until you receive a Neverfall Ship Ticket. A ship to the Western Steppes will arrive every five minutes at Dreamweaver's port. Double click on the ship, choose a role and hit enter. When the ship is filled or five minutes have passed, the ship will sail to the Western Steppes. When you arrive at the new area, talk to the NPCs around the port of Datun Docks to continue your quest.

After using the ship one time, players can visit the Western Steppes by talking to Messenger of Time Woyo, who is located in every major city.

Scula guards the entrance to Dawnlight Halls and must be defeated during the main quest line.

The main quest line of the Western Steppes begins at the Datun Docks near Niore village and it appears in pink text. Pick up your quest from the Harbor Guard Pierre in the port. The quest line awards you with a lot of Vitae so using an Ancient Gift is recommended. Through the quest line, you will discover the story of the Battle of the Grape Valley, Emperor Alexander's rise to power and the establishment of Neverfall city.

Once you receive a Neverfall Royal Badge, a gem of your choice and the book of Perfect Chronicles, you will gain access to the Chaotic Soul Cultivation quest if your character is Shifting Sky X. You can continue the quest line without having completed the Chaotic Soul Cultivation. If you are unable to continue the quest line at any point, it means that your boundary level is too low. Players need to be Astral Sky X to do the second part of the main quest line, Shifting Sky X to do the third part and Twilight Sky VI to do the last part.

The sixth boundary quest line begins at north Neverfall. Upon entering the Western Steppes at Twilight Sky X the player will receive a popup quest to pursue this quest line. It awards you with a lot of Vitae so using an Ancient Gift is recommended. It also awards items such as Mirage Charts which are required for refining Tomes. The story of the quest line is a continuation of the main quest line and focuses on Goodhill, who had previously been sent by Light Emperor Alexander to investigate the Changelings but his whereabouts soon became unknown. The player does not need to complete the main quest line before doing the Royal Sky Quest Chain.

Neverfall has several side quests that award Vitae and Neverfall Squire's Badges. They are available after certain parts of the Neverfall Quest Chain have been completed. They can be found in the Quest Log under the Find Quest tab in the "Side Quests" section, and are the only quests in that section that award Vitae.

Below is a list of the side quests that can be found in Neverfall:

Wenham village in the Western Steppes.

That are currently four daily quests in the Western Steppes that award you with Vitae and useful items. The first one is available after your first visit, but the second quest is unlocked once you reach different parts of the main quest line. The third and fourth quests are available after reaching Royal Sky I. The dailies are the following:

The Glyph Master NPCs outside Neverfall's City Hall will give you quests for items to unlock your character's six Glyph Slots for the Glyph System. The NPCs can also sell the Glyph Slot stones for 10,000,000 Silver Coins each in case you lose the one awarded from the quests. If you accidentally purchase a Glyph Stone you can try sending a Support Ticket to Customer Support, however they may not reverse the purchase as it is the player's responsibility to read the quest before taking it.

The Glyph Slot quests are as follows:

There are three types of Neverfall Badges:

Neverfall Squire's Badges are obtained from the Dawnlight Halls daily quest and quests in the Western Steppes. Neverfall Squire's Badges can be turned into higher level badges at Royal Knight Hector by crafting the items of Promotion: Knight or Promotion: Royal. The items have a chance to turn lower level badges into higher levels ones after the players craft them and right-click them. If the promotion fails, half of the used badges will be returned.

These badges can be redeemed at the Royal Knight Hector in Neverfall (349 593). The rewards include the following: