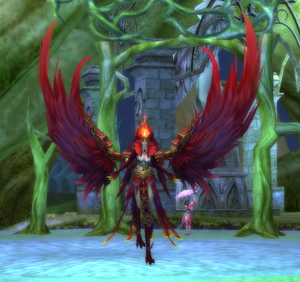 Wraith Hunters is a regularly occurring event that requires players to hunt specific bosses in instances including Gate of Delirium, Secret Frostcover Grounds, Valley of Disaster, Wraithgate, and Hallucinatory Trench. The event is available to players that are level 100+ with a boundary level of Mirage Sky I, meaning that the player must have also reawakened twice.

The event is active during random parts of the year, typically lasting between one week and one month. An announcement will typically be made to notify players of when the event will occur.

When the Wraith Hunter event is active, players will be able to pick up the quest at during the following time slots, in server time:

The quest can be done once per time slot, meaning that players can obtain the quest up to 4 times per day. The quest can be picked up at the Wraith Hunter Envoy found next to the teleport masters in City of the Lost, City of the Plume, Etherblade City, City of Raging Tides, Tellus City, and Dawnglory, and can only be picked up in the first 15 minutes of the event. You will have 1 hour and 30 minutes to complete the quest or it will fail.

Upon picking up the quest, the player will receive one of the following bosses as targets:

Players will need to navigate the instances for each boss and kill the boss. This can be done solo or in a squad.